Find Zotz in convenience and candy stores throughout the USA.
You can also purchase ZOTZ online. 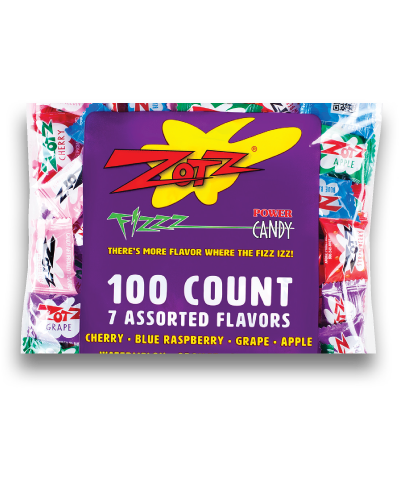 48 strings per box,
4 pieces per string. The Original Fizzing Candy, Since 1970!

In 1970, Frank Landrey returned from Europe with some Italian candies he had received as a gift. He gave the box of candy to his children. Soon, all the neighborhood kids were pestering him for more of “that funny fizzy candy!” At the time, Frank was in the habit of saying, “Don’t give me the Zotz,” if he thought someone was pulling his leg. With two ZZs in FIZZ and two ZZs in ZOTZ, the name stuck, and the first order of ZOTZ candy was shipped in July 1970.

Now, close to fifty fizzing years later, ZOTZ is still going strong, and still made in the same small family factory in Italy.

And Frank? He’s still going strong too, with some ZOTZ always close at hand.

Q. Where can I buy Zotz?
A. Zotz strings are sold in convenience stores and candy stores throughout the USA. If you can’t find them near you, or if you are looking for the 100-count bags or in bulk, your best bet (and least expensive option) is to buy them online.
Q. I am a store owner / distributor who wants to carry Zotz. Who do I contact?
A. Wonderful! Just tell us a little bit about yourself here. We will get in touch fizzing fast! You can also call us at 1-800- 243-0897, 9-4 ET. Monday – Friday.
Q. What makes Zotz fizz?
A. The fizzing center of Zotz is basically bicarbonate of soda, with a few super-secret tweaks!
Q. Does Zotz contain allergens like peanuts, tree nuts or milk?
A. Zotz contains no peanuts, tree nuts or milk. One ingredient is derived from wheat, but Zotz is gluten-free.
Q. Is Zotz gluten-free?
A. Yes. Although the glucose-fructose syrup in Zotz is derived in part from wheat, there is far less than the 20 parts per million (ppm) of gluten which the FDA (Food and Drug Administration) has declared as effectively gluten-free.
Q. How does the fizz get inside?
A. Magic! Just kidding, but you can get an idea by watching the video.
Q. What are the ingredients in Zotz?
A. See ingredients and nutrition information on all items here.
Q. Where is Zotz made?
A. Zotz is made in a little factory in northern Italy. You can see it in this video.

Scroll back to top